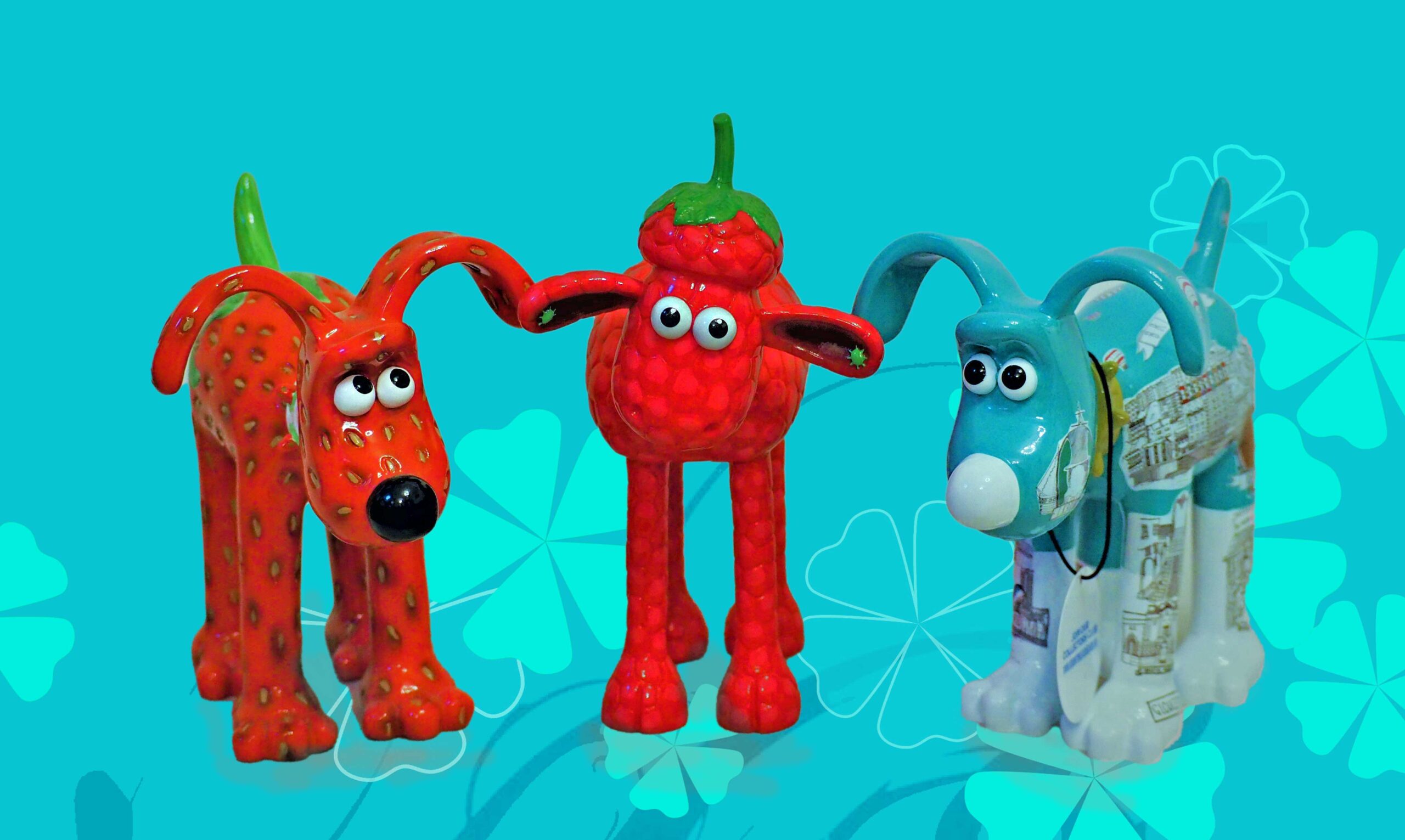 “We downloaded the ‘Sheep Spotter’ app and set off around Bristol…”

Friends of ours know that we love a good sculpture art trail…you know the type, Wolves in Wolves, Bees in Manchester, Bears in Birmingham. Wherever we go we seem to come across remnants of these trails and take the obligatory selfie. It’s become a bit of a running joke amongst our friendship group that we always manage to find some kind of art sculpture wherever we go! Our fascination with all things animal combined with art began in 2013 with the arrival of ‘Gromit Unleashed’ in Bristol…

Bristol, a place we passed through on the M5 on the way to Cornwall. We had never actually visited Bristol and it became a kind of landmark for our annual jaunt to the West Country – get to Bristol and you know you only have 3 hours to go until you are on holiday! A quick stop off at Michaelwood services was the closest we would get.

Spring 2013, I had seen on social media that there was some kind of sculpture trail happening in Bristol and that it would involve the character Gromit from Aardman animations’ Wallace and Gromit. I wasn’t aware at the time that Aardman are based in Bristol and had been supporting Bristol Children’s Hospital since 1995. ‘The Grand Appeal’ was started in order to fundraise for a new building for Bristol Children’s Hospital to replace their then home – a Victorian building built in 1866! Legends Nick Park, Peter Lord and David Sproxton from Aardman Animations allowed The Grand Appeal to use the characters of Wallace & Gromit to promote the charity appeal and the partnership was born.

The first charity arts trail took place around Bristol between July and September 2013 and consisted of 80 giant sculptures of Gromit the dog. Each sculpture had been decorated by artists, celebrities, and designers such as Quentin Blake, Cath Kidston, Nick Park and even Disney Pixar lent their talents. The idea was members of the public would follow a map and try to find each sculpture. The Gromits were huge and all decorated in unique ways – dinosaur themed, Simons Cat illustrated and covered in gold to name a few!

We decided we would stop off at Bristol (on our way to Cornwall) and try and find as many sculptures as we could! With a map in hand we set off around Bristol, following the Gromit Trail. Never having been to Bristol before we didn’t entirely know where we were going but managed to find 54/80 sculptures. Photo with each one taken, we moved on to the next. Some were easier to find than others, usually following the crowd of fellow Gromit hunters helped us on our way along with our handy trail map! As the day went on the weather took a turn for the worse and we found ourselves in Clifton. One of the Gromits was in a garden at a hotel, so, soaking wet, we entered the hotel, only to find ourselves in the middle of someone’s wedding reception! Not to be deterred, we had a Gromit to find, we made our way out into the garden, found the elusive sculpture and quickly made our escape!

We didn’t find all of the sculptures on this trail, mainly due to the time we allowed, but had a great time exploring Bristol and its surrounding areas.

Once the trail ended, the Gromits were all bought together into ‘The Grand Exhibition’ Over 25000 visitors queued to see all the Gromit’s in one place. In October 2013 the sculptures were auctioned off and raised £2.3 million for life-saving equipment, patient comforts, family facilities and child-friendly artwork at Bristol Children’s Hospital.

Not long after the trail, smaller versions of the sculptures along with other Wallace and Gromit merchandise were released for sale so you could have your very own Gromit at home! We purchased our favourite Gromit from this trail – Gromberry.

Shaun in the City

In 2015 it was announced that there would be a follow up trail in Bristol (yay!) This time it would be bigger and include 120 sculptures of the Shaun the Sheep Character. This time the trail would be split between London and Bristol during the spring and summer months (50 in London in April and 70 in Bristol during the summer). We didn’t make it to London but booked ourselves in for a 2 day stay in Bristol and set off on our sheep hunt! Determined this time to find them all we downloaded the useful ‘Sheep Spotter’ app and set off around Bristol on foot and in the car. We visited places such as Bristol Temple Meads station, Bristol Harbourside and Clifton Suspension Bridge. Once again designs for the sculptures were contributed by artists and celebrities, with VIP designs including Bagpuss Shaun by Bagpuss creator Peter Firmin, and Sheepish, a giant pink poodle created by fashion designer Wayne Hemingway. Aardman Directors Nick Park and Peter Lord also got involved and designed Shaun sculptures.

After a lot of walking and driving, we were successful in spotting all 70 of the Shauns and felt very proud of ourselves. We had also visited lots of places in and around Bristol which we would never have normally gone to (no wedding crashing involved this time though!).

After the trail had finished, the sculptures were once again auctioned off and raised over £1 million for The Grand Appeal.

In July 2014 The Grand Appeal and Aardman Animations teamed up with Elements shopping mall in Hong Kong to showcase ‘The Greatest Dog Show on Earth’ which bought together 70 new Gromit sculptures. Once again after the trail they were auctioned off to raise money for Wallace & Gromit’s Grand Appeal, the Bristol Children’s Hospital Charity, and children’s art programmes in hospitals across Hong Kong, all worthy causes.

In 2016 it was announced that there would be a new trail of Shaun Sculptures, this time in Japan. There were 30 Shauns on the ‘Shaun in Shibuya’ trail in Tokyo. After the trail these were then to be auctioned off to raise money for the Japanese Red Cross.

A couple of years later in Easter 2018, I heard about a small Gromit and Shaun trail taking place in a shopping centre in Oxford An overnight stay booked and off we went in search of these dogs and sheep which we had not seen before. Some of the Shauns had come from the Japan trail and the Gromits from the Hong Kong Trail so it was brilliant that we got to see them in the UK. As this was only a short trail we managed to also fit in some Oxford sight seeing and city exploring….

Learn more about Shaun in the City

A couple of years passed, and we wondered if there was going to be another trail. Finally, in 2018 it was announced that Gromit Unleashed 2 would take over the streets of Bristol and the surrounding area once again! Hooray! This time Gromit was not alone and was to be accompanied by his best pal Wallace, and arch nemesis, evil penguin, Feathers McGraw! The trail was to feature over 67 giant sculptures, once again designed by artists, designers, celebrities, and local Bristol talent. Big names such as Pixar Animations, LEGO and Star Trek got involved as well. Sculptures were positioned in iconic locations around Bristol and the surrounding area. Our commitment to the cause began early in the Summer holidays. We had downloaded the ‘Detect-O-Gromit 2’ app and discovered that the trail was more spread out than previous ones, with some sculptures being in Weston Super Mare and outlying areas to the north, east, south and west of Bristol itself. We set out on a mini road trip to find as many as we could and booked to return later in the summer to find the more central Bristol sculptures. On our road trip we found sculptures at Ashton Court, Weston Super Mare pier, Aerospace Bristol and even a community city farm. It was great exploring the local area and again and visiting new places. Plenty of other people were doing the same thing and we found we would often meet the same people at the sculptures from time to time.

Later in the summer we headed back to Bristol and completed the more central trails. It was a new experience having different sculptures to find in the form of Wallace and Feathers and the designs did not disappoint. All the Wallace sculptures were positioned on benches so provide many ideal photo opportunities. The penguin designs were stunning, my favourite was the ‘Plooming Marvellous’ sculpture which was styled as a peacock. Safe to say I had never seen a peacock penguin before! We managed to find all of the sculptures on this trail Safe to say my Fitbit had never counted so many steps, but we had a great time and rewarded ourselves with a Nando’s and Cinema trip (just so we could rest our feet for a couple of hours)!

The total amount raised by this trail is £2 million, with all money going to Bristol Children’s Hospital and St Michael’s Neonatal Intensive Care Unit!

From the 24th October 2020 – 21st February 2021 at the Mall at Cribbs Causeway there was a mini trail running. This included seven new designs plus some old favourites from across the trails returning. Called ‘Gromit Unleashed: The Grand Adventure’ this mini trail saw sculptures in various locations around The Mall. Visitors were encouraged to make a donation for a trail map and find all of the sculptures, once again raising funds for The Grand Appeal. Due to Covid-19 restrictions in the UK we didn’t get to visit this trail.

Once the world gets back to normal (fingers crossed!) we can only hope that Gromit, Shaun and friends will return once again to Bristol for another fab ‘Grand Day Out’ for us to enjoy

Much more than sculptures…

Established in 1995, The Grand Appeal is the Bristol Children’s Hospital charity. Its work continues between running art trails worldwide. Milestones include:

1996 With a surge of support for The Grand Appeal building work on the new hospital begins supported by generous donations from private donors, philanthropic organisations, grant-making trusts and companies

2005, he Grand Appeal funds a ground-breaking limb reconstruction unit at Bristol Children’s Hospital to pioneer treatments for children from Bristol, the South West and South Wales will severe mobility issues and complex deformities.

2012, Having raised a whopping £1 million for The Cots for Tots Appeal, Her Royal Highness Sophie, Countess of Wessex GCVO, visits Bristol to open the new Cots for Tots Intensive Care Unit at St Michael’s Hospital, and Cots for Tots House, a 12-bedroom home-from-home, providing free family accommodation for the parents of critically ill babies in the Intensive Care.

On top of these milestones, The Grand Appeal supports funding of research into treating children and look after families who who find themselves – often unexpectedly – in one of the scariest situations a parent or carer can go through. From pioneering research, innovation and life-saving equipment, to family accommodation and specialist support staff, they provide care, support and a lifeline to enable a family to cope with what lies ahead, whatever the outcome.

Days Out Reviews
Go to Top
DON’T MISS OUT!
Subscribe To Newsletter
Be the first to get latest updates and exclusive content straight to your email inbox.
Give it a try, you can unsubscribe anytime.