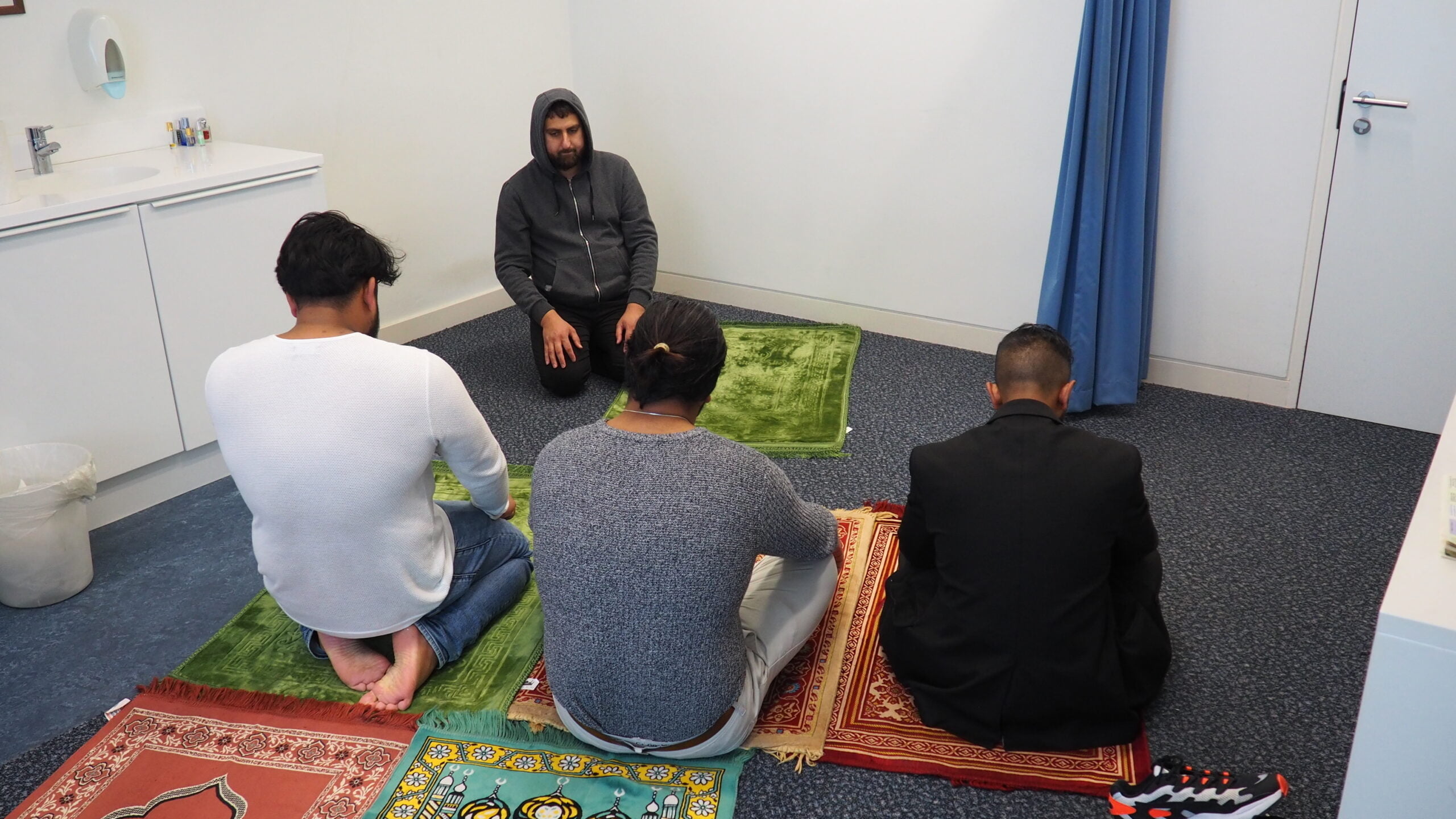 One of the benefits of working for a multinational organisation is working with people of all backgrounds, cultures and religious beliefs. In the spirit of inclusivity, my Muslim colleagues invited me to accompany them to Friday afternoon prayer, Jumah, as it is officially called.

My colleagues were really excited to know what my thoughts were from a non-Muslim perspective, and I was equally as interested to find out why my colleagues disappear on a Friday Lunch time.  So, for two Fridays in September I took up their offer and attended Jumah prayer (Friday Sermon)

Before I continue I feel it’s important to mention that In the chapter “Al-Jumah, of the Qur’an  the importance of Friday as a sacred day of worship is established.   “Al-Jumah,” meaning the day of congregation, is also the word for Friday in Arabic.

Before the Friday Sermon started one of my colleagues took me on a tour to the company’s Multi-Faith room. In true inclusive style the room is freely open to everyone to use for religious activities.  What surprised me about this room is how clinical it feels. It’s basically an office room painted plain white, with medical looking curtains that can divide the room into two halves for Males and Females. I also noticed two sinks (more on those later…).  A small table at the rear of the room had copies of various religious texts including The Qur’an, The Bible and Torah.  The only decoration on the white walls was a small printed picture of a dark cuboid structure.  My guide explained that this cubic structure is Islam’s most sacred shrine – Mecca.  It’s important that all muslims pray towards mecca in a direction called the Qiblah.

Before prayer is started, people are called to prayer. This call is known as Azanin (in Arabic).  Predominantly Muslim countries have mosques that have Minarets with load speakers. Just before the prayer starts the Azan is performed to bring everyone together for prayer.  As we don’t have these in England, Muslims perform the Azan within their prayer space, be it a mosque or in our case, a simple room.  I have heard snippets of the Aznan in movies and tv shows but have never paid it much attention. Now I think about it I find the idea that in a single moment in time all across the world people are singing the same song at the same time fascinating.

Just after 1pm I joined my colleagues ready to enter the room. Now what should normally happen is the Azan is sung, however as we are in an office in Birmingham, the Azan was performed inside the room prior to prayer starting.  At this point I noticed something really surprising; any office banter, joking, conversations of stress in the office just stopped at the door. Once entering the room everyone became respectful of each other and I got the sense of a real ‘in it together’ spirit of a shared experience.

Almost immediately they all removed their shoes, and again to my surprise, their feet were placed in the sinks provided.

My guide explained that you have to present yourself clean to God. This means washing face, hands and feet before prayer.  This is called the ritual of Wudu.  Prayer mats were retrieved from one of the cupboards I noticed earlier. One of my colleagues then took the lead as Iman (much like a vicar preaches to a congregation)

To instigate the start of prayer, the Iman initiated a sermon in Arabic.  Once the sermon was over, the Iman then led the people in the room to complete the remainder of Friday prayer by  reciting verses of the Quran. There then followed some bowing, some sitting, some standing, more sitting, more preaching, and some head movements to the left and right.   During this a prayer was made in English that acknowledged me as a friend in the room and prayed for my health and wellbeing, as well as their own. I thought this was an extremely nice touch. After completion of Prayers the Iman made a Dua (a Dua is essentially an expression of submission of faith to God) and after what looked like individual time for reflection, those present gradually  drifted out of the room once they had finished prayer.

As I genuinely had no idea what was going after prayer, my guide offered to talk me through what I had witnessed.

First I asked about prayer mats. I have seen them in use through the media but why do they exist? The answer is glaringly obvious. Muslims have to present themselves as clean to Allah, they cannot pray on an unclean floor, so they use a small rug or mat. The prayer mats usually carry intricate designs (predominantly from the village they are made in) and are hand made.

My guide then moved onto acts of the prayer that I had found intriguing – the standing with hands up, the bowing and the head movements.

Putting hands up by ears = hands up to God.  The natural reaction to a human being threatened is to put your hands up and show that you are no threat and have nothing.  By putting hands up in prayer my guide tells me that muslims are essentially telling God they present everything and have nothing left, whilst proclaiming simultaneously that God is great.

Kneeling down = kneel down to God.  Having surrendered everything to God the next act is to kneel down in the face of God, the ultimate act of submission.

Once knelt the head gets lowered further so that it touches the floor (hence the need for the clean prayer mat). The reason is that prayers are personal between the individual and God, putting the face down ensures that no distractions are able to take place and the prayer can be made.

Once standing again I noticed that during a spoken prayer heads moved left and right.  This head movement  is an acknowledgement that those standing side by side are all equal no matter what job, wealth creed, or country of origin.  Attending prayer was a cleaner, a security guard, and my colleagues evidenced the equal status.

The last thing to mention is that once prayer was over, the metaphorical switch was pressed and the office banter, and stress resumed as if pause was just taken off.

Attending Jumah has certainly opened my eyes and given me a small glimpse into what my Muslim colleagues experience, it has also provided me with an opportunity to get to know them a little better.  What strikes me is the dedication they have, not only to their religious practices, rituals and beliefs, but also to each other.  I have come to appreciate how important this prayer time is for my colleagues and what they mean when they say they are ‘just going to prayer’.   I applaud the fact that my colleagues were so open to sharing their culture with me.  In today’s multicultural world I think it’s incredibly important to make an effort to understand and respect each other.  I would encourage anyone reading this to do the same, reach out to someone from a different culture and spend some time with them. Doing so may make your part of the world a tiny bit nicer!

Do you like what you have just read? If so, show your support for the Silver Hedgehog by buying me a coffee!!

(This Hedgehog loves coffee, the ones you see in your garden are not so keen !)