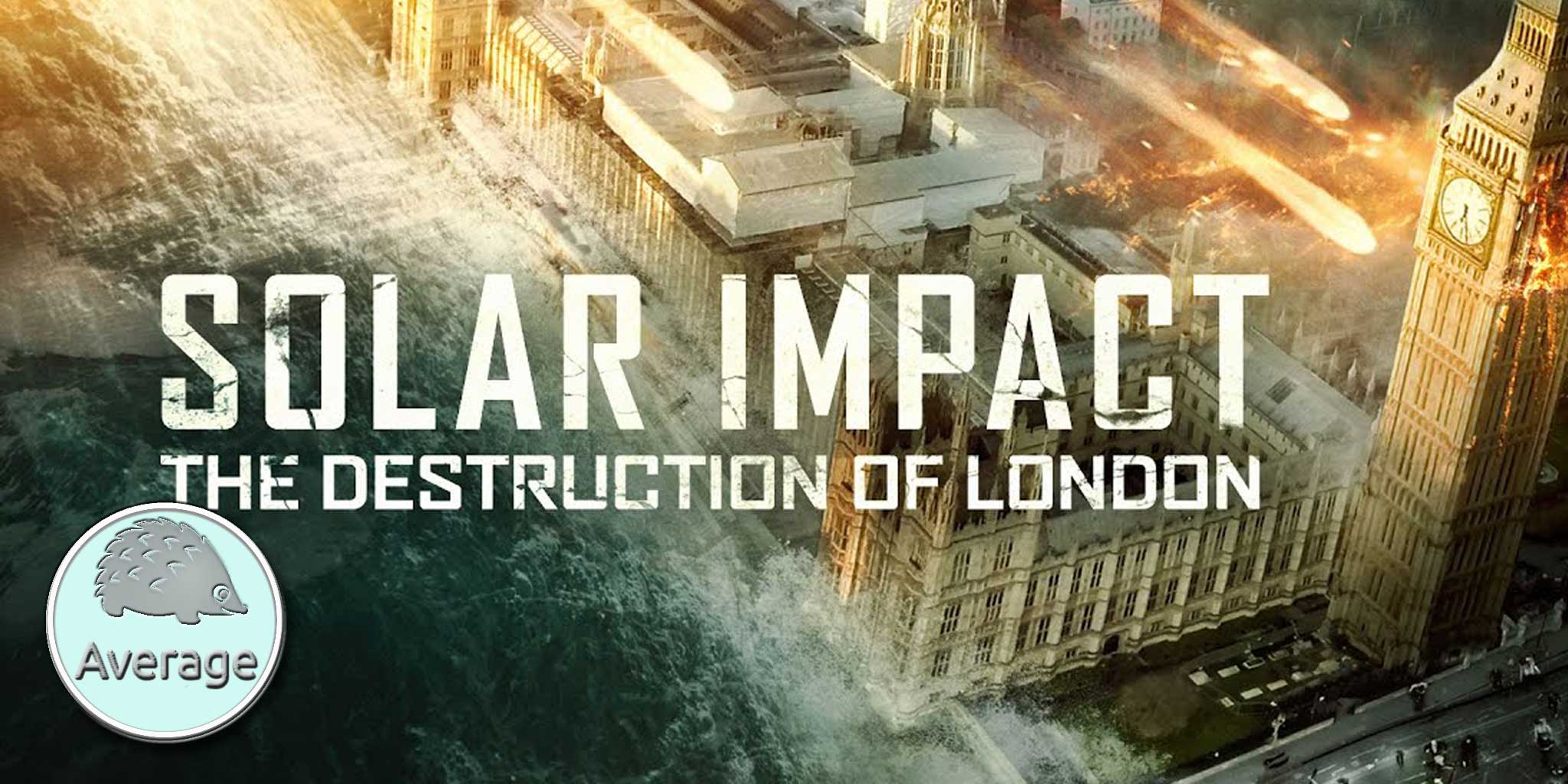 “Don’t overthink it and its pleasantry enjoyable”

What Is – Solar Impact: The Destruction Of London?

Solar Impact: The Destruction of London is British disaster event / horror movie. Distributed by Dazzler. With a title that sounds like it has been plucked directly from ‘The Asylum’ school of filming, and a trailer that provided B-Movie vibes the Silver Hedgehog’s expectation bar was set at low and we sat down and watched the movie.

‘Solar debris crashes down to Earth, causing widespread destruction and unleashing solar radiation around the world. As genetic mutations rapidly spread, a group of friends must fight to stay alive and escape the chaos’.

At a time of a global pandemic it may be unwise to launch a Zombie attack movie spurned by a mutated virus (although nobody seems to have told that to Zack Snyder and Netflix as Army Of The Dead is launched soon!), instead the writer Simon Park has created an interesting twist on the Zombie genre by using space radiation to cause a Zombie like mutation, and instead of calling them Zombies they are simply referred to as ‘The Infected’ throughout the film.

The films starts in Heatherfield, a fictional are of the UK countryside and not the rather real Heatherfield on the Isle of Skye. A meteor steams past the ISS and slams into farmers land. After a quick explosion that looks like it was from the rubbish late 1980s era of Dr WHO, a farmer’s wife quickly turns into one of the infected. This opening sequence of events is important as it not only sets the plot of what is going on, but also gives us an insight into the production of this film. We learn several things. The film is shot on a micro budget and possibly with only one or two cameras. The film is relying heavily on stock footage and the production is not going to win Oscars. It would have been easy to walk out of my own house at that point, but now armed with the knowledge that we are looking at almost amateur film production and not a Hollywood A-rated behemoth, both myself and JJ (our editor not Abrams) carried on watching….

Solar Impact: The Destruction of London centres around a group of friends and a coffee shop worker who unexpectedly find themselves thrown into a catastrophic event, they must work out what’s going on, fight to survive and get to safety. So, nothing new or ground breaking with the plot. A usual with this type of film the characters make stupid decision after stupid decision, and we found ourselves shouting at the screen a few times in frustration.

With no notable actors involved here are a couple of performances that stood out good and bad.

Susan is a coffee shop worker and, when her coffee shop becomes home to a couple of the infected, is trust into helping a group of friends get to Heatherfiled, Susan seems to have some medical knowledge and also becomes very handy with a hammer. Natalie is believable as a confused waitress turned survivalist and shows a range of emotions on her journey throughout the movie.

Jim is possibly the most annoying character in the film. He frequently looks confused and stupid, and seemingly does not get the fact that Zombies need to be killed despite doing a lot of running away from them. Jim mostly just spends time staring blankly while we shout at the screen – do something man. When given something to do other than stare, Oliver can be convincing, it’s a shame is character does not reflect the potential.

We watched Solar Impact: The Destruction of London on DVD format, Blu-ray unavailable.
It is low budget, and it shows. Craig Tudor is on directing duties and he uses some interesting techniques to get the film over the line. There are quick cuts that miss out half the action. For example, we have the footage of the meteor hurtling towards earth, the next scene is an explosion. We did not see the impact and have to believe that the explosion is the effect of the meteor hitting earth. The use of stock footage interspersed with live action is not in itself unusual however the images have been graded weirdly. At times the film goes really over lightened, or over saturated. It gives these parts the look of being filmed on a VHS camera low quality film rather than something filmed in the 2010s. Other parts of the film look normal. It’s also noticeable that the film seems have only used a couple of cameras. The shots being quite close to the subjects, or seemingly handheld.

There is no other way to say this, the sound mix is terrible. It has the option of 5.1 but not even our cinema system could make the sound bearable. The talking is way too quiet and background music way too high; it was like watching episode one of Poldark all over again. Queue a restart of the film and selecting 2.0 made it slightly more listenable, but we still had to contend with volume tennis.

Like the video, the score seems to be a selection of shall we say ‘inspired’ tracks. We had twinkly bits like the shining, we had Dum Dum beat of Jaws played via a violin type sounding instrument. Long increasing tempo sounds to increase suspense. What is jarring about all this, is that is really noticeable.

We feel music should aid what happens on screen, not take over its focus.

With an apparently small budget it was never going to have Harry Potter levels of prosthetics, and what this film does well is the rather grotesque features of the Infected and the grouse dispatching of humans and infected. What it doesn’t do well is the VFX of buildings blowing up and the aforementioned meteor impact. The other annoying effect is the dreaded shaky cam. Every-time we see a horde of the infected, other in a field or a building corridor, the camera goes into shaky mode in an attempt to convey danger and peril. However, it’s just reinforced the fact that the horde is about 5 strong and about as dangerous as a wet lettuce!

It’s nothing outstanding, the concept has amazing potential – radiation instead of the T Virus that caused Zombie like behaviour, but the writing is subpar. We do not get to learn the character names early on, there is a plot to get to a family member that is not really explained, the usual tropes are followed, I.e., get to high ground, but the story does not go anywhere. It would have been nice to see the radiation element explored more, possibly driving the MacGuffin, and I am not even going to mention that ending!!

Is Solar Impact: The Destruction of London Any Good?

If A list Hollywood titles are your thing, you will 100% hate on this film, If your into b-movie style , independent, limited budget films then you may well like this.

Could the writing, production,acting all be better, hell yes, but the same could be said for any movie ever made. The fact that no major effects studio are involved, not complex writers room have conducted rewrites, what has been achieved is both daft and remarkable. Solar Impact is switch brain of movie, don’t overthink it and its pleasantry enjoyable, the minute you make comparisons to other movies or set expectations high well then your setting youself up for disappointment

Anybody making movies in the UK needs to applauded. Solar Impact has the right ambition, but lacks in execution. It has a solid concept for creating the Infected, that really should have been explored in a better way. As it stands now, its a good try but not a great one.

Why not join other readers who are supporting our site.
Buying the Hedgehog a coffee supports the upkeep of the site to make it better and better.
Why not check out our other Features and subscribe to our newsletter before you go!