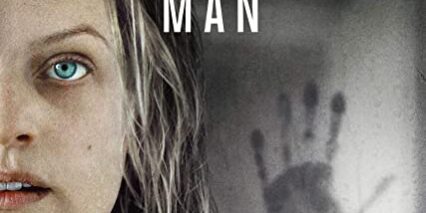 “Alone– it is wonderful how little a man can do alone! To rob a little, to hurt a little, and there is the end.”

Myself and JJ started watching The Invisible Man with a conversation about Horror films.  I like horror films such as Saw, Carrie, Train To Busan.  What really freaks me out is psychological horror, the kind that tortures your mind leaves you in suspense and then hits you hard, films like original IT, Women In Black, Black Swan, Disturbia.  JJ on the other hand prefers these psychological thrillers while I hide under a cushion!
I had heard that, unusually for an Invisible Man movie, it focuses on the psychological terror experienced by a single person. The fact that it is written and directed by Leigh Whannell, the writer of 2004’s SAW & produced by Blumhouse, who are famous for producing mainly horror films on an almost micro budget, intrigued me

What Is – The Invisible Man?

Many people think that Marvel Studios invented the Cinematic Universe (a shared collection of movies) with Phase one of the Marvel Films.  What people tend to forget is that Universal Studios created a cinematic universe first back in the 1930s to 1950’s with the Universal Monsters. A collection of films such as The Phantom of the Opera, Dracula, Frankenstein, The Mummy, The Invisible Man, The Wolf Man and Creature from the Black Lagoon. Some of the films shared tiny amounts of screen time with each other.

Fast forward to the 2010’s and Universal could only look on at the behemoth that was the Marvel Franchise. They had a plan to resurrect the Monsters Universe starting with Dracula Untold, following up with 2017’s The Mummy and announcing The Invisible Man starring Johnny Depp.  Dracula did ok at the box office but The Mummy tanked and ultimately the new Monsters Universe plan was scrapped.

All went quiet until Jan 2019 when Universal announced the Monsters Dark Universe. Basically they have given up attempting to make a family friendly shared universe of characters and instead opened the characters up to independent, unrelated one off productions. DC is doing something similar with their slate of super heroes characters, with the Joker leading the way.

So out went Johnny Depp and a massive budget and in comes Indi horror specialists Blumhouse, bringing on board Whannell to write and direct.  Whannell  has taken HG Wells 1897 source material and used it as inspiration to bring the character back to the big screen in a way not seen before.

HG Wells story is about an optical scientist that dedicated his life to making himself invisible and the intrigue and murders that ensue as a result.  Whannell has flipped it so we see the story from the point of view of the invisible man’s tortured ex girlfriend (Elizabeth Moss). It’s not about the invisible man reigning chaos over a country or indeed a town. It’s more personal than that. Imagine what domestic abuse would be like if your abuser was invisible. Whannell’s script explores the relationship between the abused and the abuser- what type of damage an invisible abuser could reign down on someone. Destroying relationships rather than killing people, torturing the mind, making someone seem mentally unstable.   It’s a great idea and seems like perfect timing to bring this type of character back.

Moss is on a bit of a winning streak, gaining notoriety for her performances in Mad Men and The Handmaid’s Tale. The Invisible Man focuses all of its attention on Moss’ character and as such Moss is tasked with providing all the emotional weight of the film. From the film’s subdued start it is clear that Moss’ character Ceclia Kass is a victim of some kind of abuse and is escaping an abuser. Moss deftly shows the panic in someone hellbent on getting out of her situation. Once the escape is complete, the film shifts to the slow build up to the final climactic scenes.  Through all of this the range on display from Moss is fantastic.  The build up of internalised fear, mental torture and reactions to physical events is shown deftly on screen. It would be easy for a one scream fits all approach to acting, but Moss is able to switch from tortured tears to a look of dead behind the eyes just as easily as it is to flick a switch. Moss seems to be a perfect casting and it’s clear that Moss has enjoyed exploring this side of her craft and that the relationship with Blumhouse worked well.  It has recently been announced that Moss is to star in their next production ‘Mrs. March’

Jackson-Cohen’s performance is hard to quantify. We get a glimpse of him at the start of the film and then do not see a lot of him for the rest of it (pardon the pun).  When he is on screen his performance is ok. He doesn’t seem to bring any sense of depth to the Griffin character and all things considered he’s a run of the mill antagonist. I would have liked to have seen more about what drives his compulsions and more personality on the screen.  Films like Silence Of The Lambs show how you can have a key character leave a lasting impression without masses of on screen time.  Jackson – Cohen plays the titular character by the numbers and is forgettable, Anthony Hopkins, he is not.

Emily is the sister to Moss’s character.  They have a decent sister relationship going on and it’s clear that Emily has put up with a lot of Cecilia’s emotions for a while.  Dyer plays the character well and whilst she doesn’t reach Moss’s level of emotional range it’s clear they share a sisterly bond and does not feel miscast.

Rent The Invisible Man from CinemaParadiso

We watched on a 4k Blu-Ray featuring an ATMOS soundtrack.  The film utilises ATMOS really well.  We had the sound of rain falling overhead and also a mobile phone buzzing overhead when it was in the loft on screen,  The score has been provided by composer Benjamin Wallfisch. and whilst suits the film is not at all memorable. It’s generic spooky music and I won’t be rushing to get it on a playlist.

Being Blumhouse produced, the film does not have a mass of digital VFX. Whilst this may be surprising as The Invisible Man would lend itself to being VFX heavy, Whannell has excelled in using practical effects undercut with some very clever camera panning and only resorted to VFX for a small number of scenes. It is a very Hitchcockian style that suits both the movie and Blumhouse’s budget.

The film begins with Elizabeth Moss’ character escaping from her suggested captivity.  At this point we get glimpses of what is to come but at no point does the film explain anything about the ‘Invisible Man’. We are told about his obsession with Kass and that’s about it. Who is he, what research has he done or is doing? Why are the authorities interested in his technology? The movie assumes that we know what’s going on and doesn’t bother explaining.

One character not mentioned above is James Lanier played by Aldis Hodge.  He kind of just appears and whilst vital to what goes on in the film we know nothing about him. He appears to be a single parent, but his relationship to the Kass sisters is not explained and how they are so close to his daughter is more of a mystery than the entire film.

If anyone is playing horror film bingo, we have : Clever fight scenes, a suspicious brother, a Scooby Doo style reveal, a couple of sliced throats, a sinister rain storm, and a psychiatric hospital – BINGO!

Is The Invisible Man Any Good?

Technically the film is excellent. This is a volatile and gritty adaptation of an absolute classic story. Its 2 hour run time doesn’t seem to lag and it doesn’t suffer from the dreaded middle act drag. Suspense and action is handled well and Moss absolutely shines in her performance – carrying the film.  It’s a shame that lazy writing expects the audience to have some prior knowledge of the subject source material and that certain characters turn up without having any clear explanation as to why they exist. The titular character is portrayed with no gravitas and seems to be a missed opportunity.

Whilst the film does a fine job of reinvigorating the Universal Dark Universe films as one off movies, it falls short of making The Invisible Man a memorable character going forward.

Visit us on FacebookInstagramTwitterTwitterBuy Me A Coffww
DON’T MISS OUT!
Subscribe To Newsletter
Be the first to get latest updates and exclusive content straight to your email inbox.
Give it a try, you can unsubscribe anytime.

Some of Our Other Reviews
Go to Top
DON’T MISS OUT!
Subscribe To Newsletter
Be the first to get latest updates and exclusive content straight to your email inbox.
Give it a try, you can unsubscribe anytime.