Vampires vs. The Bronx – Film review 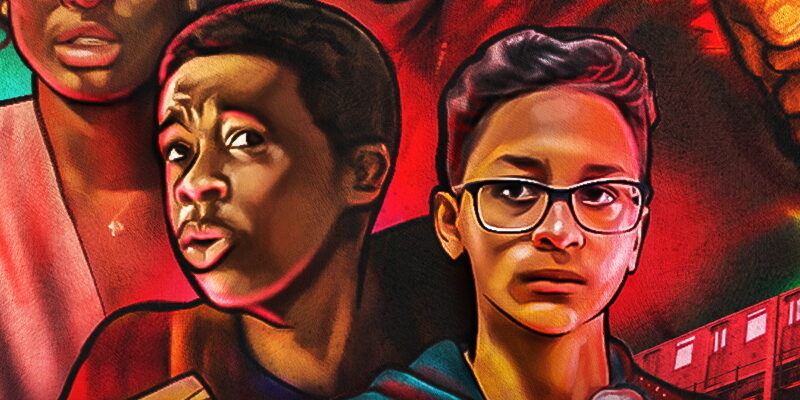 ‘A group of young friends from the Bronx fight to save their neighbourhood from a band of vampires.’

What is Vampires vs. the Bronx….

There is a long line of Movies that have the synopsis in the title –
Snakes On a Plane 2006, The Towering Inferno (1974), Lesbian Vampire Killers 2009. Joining this esteemed list is Vampires vs. the Bronx.

Vampires vs. the Bronx is a horror comedy.  It takes aim squarely at the family end of the film spectrum and as it features Vampires, it has a little gore.

Like many films these days you may think that Vampires vs. the Bronx is based on a comic or graphic novel. In fact, it is an original screen play, written and directed by Osmany Rodriguez (famous for being a Saturday Night Live film segment director.) Originally slated for release by Universal Studios, Netflix picked up the distribution rights and started streaming it in October 2020.

‘A group of young friends from the Bronx fight to save their neighbourhood from a band of vampires.’

A mysterious corporation has arrived in the Bronx and is buying out the local stores. Their owners are apparently leaving the Bronx with cash offers they cannot refuse.  Miguel Martinez (Lil Mayer) sets about attempting to organise a Bloc Party, fundraiser to save his local Bodega (convenience store) and expresses concerns to the locals that the neighbourhood is being gentrified. No one takes any notice as after all he’s just a kid. After witnessing a Vampire in action taking out one of the local Gang members, Miguel runs into the Bodega and tries to convince the owner, and stand in father figure,‘ Tony’ (The Kid Mero) he had seen a vampire.  Tony doesn’t believe him, after all he’s a kid!  Eventually his two friends clock onto the fact that the vampire did not appear in a mirror. Finally believing ‘Lil Mayer’ the trio set out trying to save the Bronx from the Vampire infiltration, aided by a teenage girl with special vampire knowledge (Coco Jones) and a Priest (Method Man) who has a hard time forgiving past sins.

Think Goonies meets stranger things, and you get the tone of the movie.

There are a lot of comments on social media and other reviews that Netflix Vs the Bronx is a dumbed down vampire movie, and that it has been ‘Netflixed’ and sanitised of gore. After watching the film I think these comments totally miss the point of Vampires vs. the Bronx. Not only is the film aimed at a younger audience, it also tackles underlying themes in the background. It is a type of storytelling not usually seen in more traditional Vampire movies.

The film is a who’s who of talent, so I have picked out 3 performances that stand out good or bad…

Jaden Michael as Miguel Martinez – Jaden is an upcoming talent, at only 16 years old, he already has a list of notable credits including Blue Bloods. He takes the lead role in this film and does not miss a step.  He is asked to not only provide comic relief but also deliver action set pieces when taking out Vampires. He is totally believable as the kid no one listens to and seems to be having a great time on set. Spot on bit of casting!

Method Man as Father Jackson- Father Jackson is a gruff catholic priest who does not tolerate bad behaviour and has seemingly thrown one of Miguel’s friends out of church.  Its more of a cameo appearance but he is central to the plot, how else are the Kids going to get holy water? Played both straight and for laughs, Method man lands a little gravitas to proceedings and did make me smile when I realised who it was. (Insert your own joke about method acting here)

Coco Jones as Rita-This casting and character story arc poses a bit of a problem, firstly Rita is only shown in the background of scenes for the first half of the movie. It isn’t until the second half of the movie Coco gets anything to do, and then its not a lot of support.  Her character doesn’t seem as well thought out as the boys and seems somehow shoehorned into the screenplay.

Secondly I am not sure what age Rita is  supposed to be, but if by my reckoning Coco was in her 30’s was this was filmed and it shows, she powers over the boys physically she doesn’t look even close to the boys age and when you notice it , it’s a little of putting.  That’s not to say Coco Jones performance is bad, I think she pretty much nailed what she was given to do. Her character just needed a little bit more thought in the writer’s room.

What to Look Out for…

This may be a straight to Netflix production, but the visual effects hold up, the vampires have the usual demonic pale look that’s become the norm across this genre.

The the effects, sets and costumes do not look cheap even though the film is straight to VOD and the director implements a clever use of lighting to aid suspense

The soundtrack works really well with the action on screen, but is not memorable and the score does not seem to appear on any streaming services.

Netflix present the film in HD only with standard 5.1 sound. No Dolby Vison or ATMOS on this release.

Vampires vs. the Bronx, has clearly been produced by fans of Vampire fiction. Hints of other franchises are sprinkled all over the movie.

The Corporation taking over the Bronx is ominously called Murnau Enterprises and the company logo incorporates the image of Vlad the Impaler.  The first Vampire film was Nosferatu (1922) directed of course by  F.W. Murnau.

Look out for Luis’s special vampire knowledge.  He is well versed in how to handle vampires and convinces the trio to use the Blade movies as source material for training! Queue the on screen cameo of Wesley Snipes’ Blade.

This is no Shaun of the Dead level ‘funny’ movie, but it does have some nice comedic moments sprinkled through the film.  These are delivered in a mix of one liners that embarrass the kids, ominous but witty posters in the background of shots, or dialogue the kids say when slaying vampires. It is this mix of ‘in your face’ and subtle humour that lightens what could otherwise be a very dark movie.

Is Vampires vs. the Bronx Any Good?

This is a fun almost family friendly vampire flick, that has more layers than a film like this should have. Its great to see that the story is a little bit more fleshed out (pardon the pun) than the title suggests. Its easy to see why Netflix picked it up as it is well produced, and the effects are fine for this type of film. Vampires vs. the Bronx does not have ‘Underworld’ levels of gore but it doesn’t need to and it knows it. Essentially is a Spielberg type kid’s adventure, that has a lot of fun referencing other vampire franchises along the way.

Why not join other readers who are supporting our site, buying the Hedgehog a coffee supports the upkeep of the site to make it better and better.
Like and share our Facebook page, follow us on Twitter ,Instagraam  or deop a comment on the box below
Why not check out our other reviews before you go!