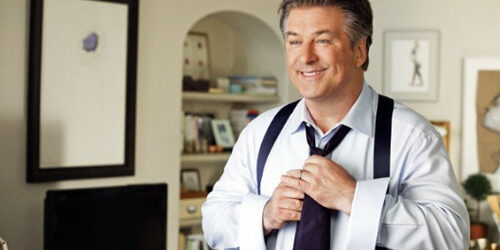 “On paper, Drunk Parents should be an absolute riot to watch”

I rented ‘Drunk Parents’ from Cinema Paradiso. Here is how I got on…


What Is Drunk Parents…

Drunk Parents is listed as a Comedy.

It starts with Frank (Alec Baldwin) and Nancy Teagarten (Salma Hayek) dropping their only daughter off at an expensive looking college. They return home to their huge British style mansion and all is not as it seems… They are actually broke and facing the prospect of bankruptcy. Desperate to fund their daughter’s education, they start to empty their house contents out onto the lawn and try to sell it to passing neighbours. During the evening they sit amongst their yard sale and get very drunk. One thing leads to another and they end up listing their absent neighbours house (which Frank should be looking after while he is away working in the UK) on Craigs List for rent! This snowballs into crisis after crisis and the plot includes a convicted sex offender, theft of furniture, fire and a random Will Ferrell.

Alec Baldwin, is best known for roles such as Jack Ryan in Hunt for Red October, and parts in The Aviator and Departed. Apart from doing some voice work for films like The SpongeBob Squarepants Movie and Madagascar, Alec hasn’t really ventured into the realm of comedy and it shows. Not only does the script deliver him dud lines to work with, but his natural charisma is also not enough to turn a flat script into a comedic work of art. During the ‘comedy’ set pieces he comes across just looking awkward. In the future, I would much prefer to see Alec Baldwin playing a role such as Danny Ocean (Ocean’s eleven) where he can provide a comedic line or two but more natural comedy actors can do the heavy lifting as an ensemble.

Salma Hayek’s early career is full of A-list great films like, From Dusk till Dawn and an absolute favourite of mine, Dogma. In Drunk Parents Hayek gets to play alongside Alec Baldwin as his wife and co-conspirator of the schemes to get them out of the predicaments they find themselves in. The film’s script really lets her down. We have zero-character development, the ‘funny’ bits just restrict Hayek to either a shouty rant about the price of a cucumber or attempting comedy by getting stuck in a oversized cat flap entering her own house. The chemistry between husband and wife is also not believable. The movie has the tone of a buddy comedy rather than a husband and wife relationship, it’s a complete waste of talent.

Jim (James) Gaffigan is an American stand-up comedian. As a comic he manages to upstage the two leads in every scene he is in. Showing comic timing and a more animated performance. He is also the only actor that gets a character arc. The downside being a scene detailing how Carl became a registered sex offender is at total odds with the tone of the rest of the Movie, even if it does add an extra layer to Carl’s character.

What To Look Out For In Drunk Parents…

Drunk Parents does not seem to have a dedicated score available to listen to separately. Music has been composed by Andrew Feltenstein and John Nau. Listen out for both Alec Baldwin and Salma Hayek singing Tomorrow (from Annie).

Nothing revolutionary regards the video quality. Filmed in 1.85 : 1 Aspect Ratio, and presented on DVD standard definition format. No HD or 4K content here. It looked sharp enough upscaled through to 1080p.

Look out for Alec Baldwin’s running gag through the film, Baldwin, changes his voice and situation when answering his phone. This is to avoid being caught – hilarious – yes that is sarcasm.

Carl gets locked into a homemade panic room; it is never explained how he gets out.

The Police turn up to an empty house and ask if it has been robbed, they do not appear when two kids use a Taser in the street?

Is Drunk Parents Any Good?

On paper Drunk Parents should be an absolute riot to watch. The plot points and themes are comedy gold, unfortunately Drunk Parents is no Ealing comedy, its not even at ‘The Hangover’ standard of funny, its around the level of the American remake of ‘Death of A funeral’. At best, the jokes don’t land and at worst they are so obvious they are unfunny.

Note to producers If you have to shoehorn Will Ferrell in half way through a movie you need to A: look at your script and B: revisit your casting choices. Ferrell’s presence in Drunk Parents just exposes the flaws in the film and using the same unfunny gag twice in as many minutes, smacks of desperation.

Drunk Parents listing as a comedy maybe the only thing funny about this film, that and the rating it’s getting…..